For years Google has been stalking Amazon in e-commerce with little to show for it in ground gained. Now, just as Amazon stock may get a further lift from a logistics-based initiative, Google stock could be poised to benefit from a turnabout in its online shopping strategy.


On the prowl for new revenue streams, Amazon.com (AMZN) is offering its massive distribution network to outside merchants. No longer will Amazon’s army of warehouse robots, delivery trucks and drones be only at the disposal of those who sell goods on its website and app. Merchants who do not sell goods on Amazon.com can use the e-commerce titan’s product fulfillment services for delivery and returns as part of a program called Buy With Prime.

But e-commerce strategy also is evolving at Google and its parent Alphabet (GOOGL). Google now plans to protect its core internet search and advertising business and rejigger its ambitions in e-commerce by using its position as a prime gateway to the internet. Its aim essentially is to be the official greeter for online shoppers.

Google put the wheels in motion on its strategic pivot in 2020. As a result, it may now be in a better position than other e-commerce players as Buy With Prime unfolds.

With its move, Google largely gave up on providing a shopping destination that handles transactions. In other words, it stopped emulating Amazon.

Instead of offering merchants its own delivery services, Google went back to its roots and tapped into its major strength: the huge user base of its search engine.

If e-commerce-related advertising helps drive Google’s search revenue growth, it may not matter so much that Amazon dominates online shopping. Analysts estimate that Google ad search revenue will grow 12% in 2022 to $167.4 billion.

Amazon’s growth in the highly profitable digital ad space will still be a worry. But Google aims to chip away at Amazon’s dominance in product searches by having consumers start with its Chrome browser rather than Amazon’s website.

“We are truly agnostic as to where transactions will be,” said Welsh. “That’s not how we make our money. We’re not the retailer, we’re not a marketplace. We think that ads are a really important part of how merchants can get discovered and how they can connect to consumers.”

Amazon Stock And The Buy With Prime Program

Announced in April, Amazon’s Buy With Prime program is in the early stages of being rolled out. At its annual Accelerate conference, Amazon said it would offer new marketing tools as part of Buy with Prime.

A Truist Securities report says merchants that sell on Amazon.com pay 28% to 33% of their sales to Amazon, including commissions, fulfillment and product placement ads. Extending the distribution capabilities of Prime shopping to online stores beyond Amazon.com opens up new revenue streams.

Online shopping merchants will pay Amazon for logistics support, storing customer data and processing payments. That also should be a boon for Amazon stock and earnings.

Amazon is taking advantage of the excess logistics infrastructure it built up during the coronavirus pandemic, says Evercore’s Mahaney. The Buy With Prime program may build on Amazon’s dominant position in e-commerce.

Some 60% of Amazon revenue now comes from sellers on its third-party marketplace, not direct sales to consumers. Buy With Prime could further diminish the impact of Amazon’s own online storefront as a percentage of revenue.

One factor in Google’s success will be making internet search more shopping-friendly with visual improvements. Another factor will be indexing merchant catalogs; Google says it has some 24 billion product listings and its list is growing. Welsh contends Google will offer consumers more choices than Amazon.

What matters most to Google stock is that consumers start their online shopping journey with the search engine. From there, Google aims to drive traffic to sellers’ websites, not its own online marketplace.

According to a Morgan Stanley survey this year, 59% of Amazon Prime members visit Google search or YouTube first to research products, up from 50% in 2020.

Of course, those Prime members can return to Amazon.com to buy. Getting consumers to the online stores of Google advertisers is key.

“It’s up to Google to experiment and expand the shopping experiences that consumers discover on Google,” said Juozas Kaziukenas, founder of research firm MarketplacePulse.com. “I’m sure Google will continue to experiment to improve conversion rates for retailers and brands. Their position as the No. 1 search engine allows them to just keep at it because people will keep coming back.”

Google has leveraged artificial intelligence and other technologies to improve search and shopping. It’s all part of a movement among tech giants to leverage AI technology.

About Your Online Broker.

“Google is focused on constant improvements in targeting, to better match up consumers and retailers, using the data that they have,” said Evercore ISI analyst Mahaney.

Merchants, meanwhile, can use Google Analytics to track customer behavior at online stores.

“We’ve made it much easier for merchants to upload their inventory (product listings),” said Matt Madrigal, vice president and general manager of merchant shopping at Google.

Further, a new “Checkout on Merchant” service allows consumers to click on a free listing and to be directed to a merchant’s checkout page. Google plans to launch pilot programs with Walmart (WMT) and Shopify (SHOP) in the U.S.

“We’re an ecosystem-enabler,” Madrigal added. “We provide a lot of insights to merchants to help them grow their businesses. We have a competitive visibility report that really helps merchants get a view of the competitive landscape and recommend actions they can take.”

He adds that to help merchants close deals, Google provides data on price adjustments they can make.

At the Google Marketing Live event in May, the company unveiled plans to bring augmented reality to search. Google will allow merchants to place 3D product models directly in search ads. Consumers will be able to render those 3D products in an AR setting.

A core part of Google’s strategy is partnering with e-commerce companies like Shopify, BigCommerce (BIGC), GoDaddy (GDDY) and Wix (WIX). Their online retailers list products on the Google search engine.

Shopify sets up e-commerce websites for small and midsize businesses, and has its own payment technology. One overhang on Shopify stock is that the Canada-based company is building its own distribution network. Costs have climbed.

Some of Google’s e-commerce partners will be impacted as Amazon brings more retailers under its fulfillment umbrella through Buy With Prime, analysts say.

Despite many forays into e-commerce, Google has gained little market share or taken a bite out of Amazon stock.

Google rolled out the search-based Froogle shopping service in December 2002.

In 2020 as Amazon stock was trending higher, Google took a few steps to build an anti-Amazon ecosystem. Because Amazon has its own in-house brands to sell, it competes with retailers.

In turn, a big chunk of Amazon’s advertising business comes from companies that pay to be listed as a “sponsored product” high up in the search results at its website.

In 2020, Google allowed sellers to list their products in its main search results for free. That reversed Google’s decision in 2012 to require that merchants buy ads to have their products appear in shopping searches.

But the Google Shopping website doesn’t get much web traffic. It mainly offers product price comparisons.

As the coronavirus pandemic fades, e-commerce growth has reverted back to pre-Covid levels for companies such as PayPal Holdings (PYPL). Amazon stock recently got a lift, but is trending down. 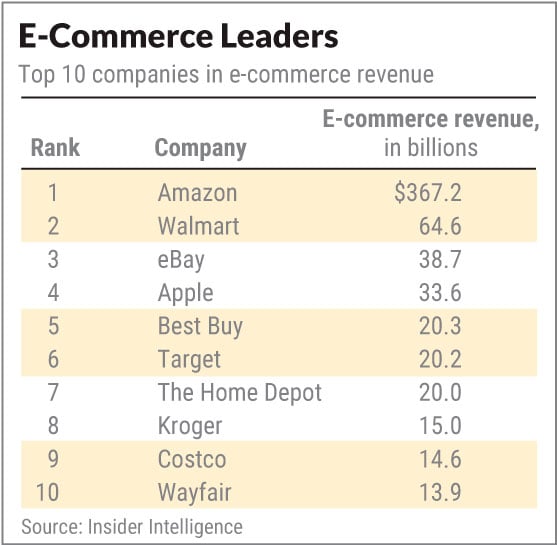 According to Digital Commerce 360, Amazon and its third-party merchants accounted for 43.5% of digital spending in 2021. No online shopping market share data was available for Google.

At this point, social commerce accounts for a small fraction of e-commerce. It remains to be seen whether Amazon stock or e-commerce companies such as Etsy (ETSY) or eBay (EBAY) will face a threat from social commerce.

“Especially in categories like fashion, a lot of the consumer brands are moving toward an influencer model as opposed to an advertiser model,” he said. “The influencer is usually showcasing the brand’s products in day-to-day activities. As brands go out to meet customers where they are — in social media — the buying process gets incorporated into a platform.”

YouTube content creators will be able to link their storefronts to Shopify and sell directly to viewers. Creators will display products on YouTube channels during livestreams or at the end of videos.

Levers For Google To Pull

While it doesn’t have the e-commerce infrastructure that gives a boost to Amazon stock, there still are many levers to pull to help Google stock, said Sky Canaves, analyst at Insider Intelligence.

For example, with location technology and internet searches, Google can lead consumers to physical retail stores. The Google Lens camera app enables users to search for products, online or offline.

“I think they’re going to double-down on merging content and commerce,” Canaves said. “There are so many properties — from search to maps to YouTube — to drive retail activity and boost advertising. And some of them are advantages that Amazon doesn’t have.”